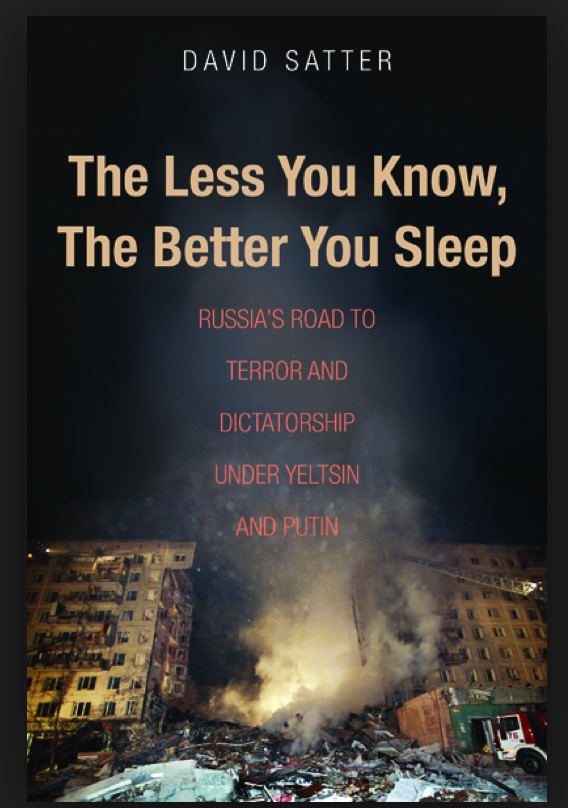 How is the new Russia like the old Soviet Union? Control is centralized, as David Satter points out in his study of the country under Yeltsin and Putin, The Less You Know, the Better You Sleep.

And the title is accurate.

The book lays out how power no longer resides in the party, but rather in an interlocking system of corrupt government and oligarchs with complete penetration of the society right down to street level. Media, judiciary, police, and commerce are all under the thumb of Vladimir Putin and his cronies.

This message has been coming out for some time now, but Satter’s systematic demonstration is unsettling to say the least, especially at a time when the west is concerned primarily with the Middle East and now Europe ever since Brexit.

One of the happiest people on the subject of Britexit must be Vladimir Putin, because Europe has been weakened by the loss of a major contributor.

Paradoxically, this comes at a time when NATO is finally coming around to seeing the Russian threat. Angela Merkel, no warmonger, has said Russia is no longer an ally but a competitor. At this writing, four NATO battalions will be placed in Poland and the Baltics after a July 2016 NATO conference in Poland. Canada is considering participation, while three of the other four are to come from the USA, Britain, and Germany. But will Britain’s commitment to NATO slacken after the withdrawal from the EU? President Obama says we should not worry about it, and yet we should.

David Satter’s concerns with Russia are echoed in Arkady Ostrovsky’s The Invention of Russia, which is equally damming of the régime if not quite so bone-chilling.

I have skin in the game because I am in the Baltics often, doing research for my novels, and I have family living there. But coverage of this part of the world is slight in North America. At my regular poker game, attended by intellectuals of various stripes, I am considered an alarmist about Russia.

Maybe it’s because the more I know, the worse I sleep.